When we moved into our new home, I knew then I wanted to plant a garden the first summer we were here. The purpose of a big garden, was because I could can and provide healthy food for my family. We began laying out plans on scraps of paper here, and scraps of paper there, of what we wanted to grow and how we wanted to lay the rows. We began purchasing seeds (do not wait till time to plan to look for one specific garden vegetable/fruit you want to plant – you will NOT find it) and I was getting excited the closer and closer May came.

But first, we had to have weather to cooperate as we needed to get in and get the soil tilled. This part of the property had been an organic garden many years ago, for the previous owner. However, it had been left to grow over and return to the grass and weeds the same as the rest of the side property. But even before that, we had to buy a tiller. We researched different tillers, the prices, the length and number of tines, the motors, etc.. We finally decided on a Cub Cadet. We anticipate that it will last us many years of tilling not just the garden, but elsewhere on the property should we have the need. (Let it be known, we would rather have a small farm tractor – compact they call them – that would make the tilling twice a year go much quicker). We (ok, Andy) tills the area for the garden twice, once one direction and then once the other direction – May 14th. Between that date and May 28th, the weather was rainy and sloppy and could not get back in to finish tilling. So, on May 28th, it was tilled a final time before planting.

When it had been tilled on May 28th, we planted seeds for almost everything. We had bought the peppers and tomato plants at Green Farms. The potatoes were cut from ones that we had set aside throughout the winter for just that purpose. In other words, the ones that most people throw away because they have the start of “eyes”. Yes, those. We put them in the basement over the winter for the purpose of planting them in the garden. And they did produce. I am getting ahead of myself.

So here is what was planted:

June 10th we lay out the fence for the cucumbers so they grow up, instead of all over the place. Destany and Andy worked hard on this. So fast forward through June and into July. Throughout that whole-time period, we are all very busy and getting into the garden to get the weeds out is a daylong project every time we are out there. (lesson learned). One day, we were out there so long, I resembled a lobster when we went in for the night. Ah yes, let us not forget the #freerange chickens that are now still not in cages but no longer allowed to wander all over the place. They decided on my first day of canning to “cross to the other side”. We spent over 2 hours looking for them before they finally “appeared” in the neighbors’ shrubs across the street. But, anyway, I have some awesome photos of them in the garden with us throughout the summer.

Harvest started coming in the end of July. It was slow at first, and then WHAM, here everything comes at once. Day after day in the hot kitchen prepping, canning, rinse, repeat. My best friend was the box fan on the small red step stool (more like a miniature ladder) that the cats use in the winder to get on and look out the window at the birds and the chipmunks and whatever else might be passing through. I learned many a lesson from the actual process of canning: make sure you have EVERYTHING you might need BEFORE you start; including but not limited to, jars, vinegar, sugar, spices, seasonings, herbs, etc… and make sure you have LARGE enough pans to heat and/or cook what you are canning.

Final Harvest numbers….. well… it was an amazing harvest season, even though the bean plants did not produce nearly as many beans as we had hoped; however, a friend donated the last of his green bean harvest to us. There were 8 pie pumpkins, but they accidentally were left outside and froze before we could get them canned for pies. We did not have any onions at all, they need to be started like the potatoes, not from seed. The lettuce rotted early on in the year due to the rain we had at that time. It quit raining some time during the summer and we had to remember to go out and water in the morning before the sun came up. And the tomatoes, they grew and grew and grew and started to pull the cages over on themselves, so we took thick wood stakes and tried that. They grew so heavy they pulled those right no over too. 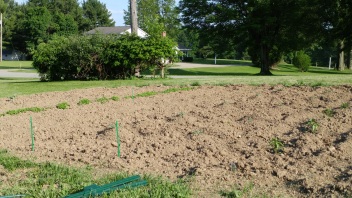 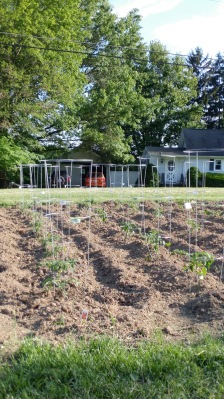 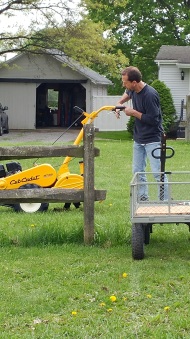 There were so many lessons learned throughout the year from this one garden. How many can you spot? Leave me a comment and tell me some of your lessons learned from your first garden or your many years of gardening.